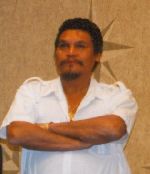 He was born on December 23, 1958 in White Earth the son of Harold and Deloryce (Welch) Jackson Sr.

He lived in past ten years on and off at Pine Point Clubhouse in Ponsford, Minnesota.

Survived by a son Dakota Jackson of Duluth; a brother: Anthony Jackson of Duluth; sisters: Lydia Bellanger of Minneapolis,Penelope (Bruce)Rediel of Otter Tail, Jacqueline Jackson of Mahnomen and Patricia (Daryl) Moran Sr. of Ponsford; many nieces and nephews.

Preceded in death by both parents, brothers and a sister Harold Jackson Jr., Pamela Risdon , Kenneth Jackson and Gary Jackson.

A visitation will be held on Friday, July 22nd two hours prior to services at the church.

Honorary casket bearers will be all of his nieces and nephews.