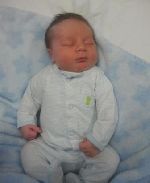 Drake was born on April 1st, 2013 at the Buffalo Hospital.
Buffalo, Minnesota.

Survived by his parents Eric Johnson and Amber Czanstkowski and by his sister Makenna Weege, grandparents: Richard & Susan Czanstkowski of Buffalo, Valerie Pool of Grand Rapids and Richard & Diane Johnson of Montrose; great-grandparents: Francis Czanstkowski of Delano and Robert & Delores Chapman of Maple Grove; many Aunts, Uncles, Cousins and many special Friends.

A visitation will held from 9:00 A.M. until time of services on Friday morning, April 19th.