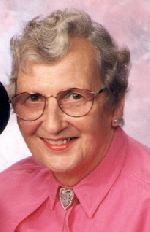 Dorothy’s mother passed away when she was three years old. She was raised by her grandparents Max and Augusta Ristow.

Dorothy Ristow and Fred Wuetherich were joined in holy marriage on December 17, 1949 at the Evangelical United Church of Christ in Lester Prairie. Their marriage was blessed with the birth of four children. Dorothy and Fred celebrated their 50th wedding anniversary in December 1999.

Dorothy spent 46 years on the farm in Lester Prairie. In 2006 she moved to a town home within the city limits of Lester Prairie. Dorothy was a fixture at the local grocery store. Each time the store changed ownership, Dorothy stayed on. She worked at the store around 40 years. Dorothy was selected as honorary senior citizen for Prairie Days in 2017. Her first time riding in a parade.

She enjoyed antiquing, flowers and feeding the birds in her back yard. She was quite a collector of swans, pitchers, bird figurines and whatever else struck her fancy. She also collected friends. She was a friend to people of all ages, always giving words of wisdom.

Dorothy was a faithful member of the Prairie Community Church, UCC in Lester Prairie, MN.

A Funeral service for Dorothy Wuetherich will be held at 10:00 A.M. on Tuesday, September 25, 2018 at Prairie Community Church, UCC in Lester Prairie. Pastor Al Fiene will officiate. Interment to follow at the Lester Prairie City Cemetery.

Online condolences can be directed to www.chilsonfuneralhome.com