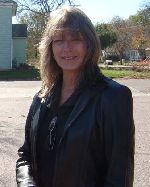 Dori Ellen Bowie, daughter of Daryl and Ethel (Gullickson) Johnson, was born on January 24, 1959, in Sioux Falls, South Dakota. She grew up there and received her education, graduating from Washington High School in 1977.

Dori worked for a few months in Sioux Falls after graduating and then was married to James Bowie. They moved to Topeka, Kansas where she worked at the shoe store James had managed. They later divorced. Dori had moved to Tulsa, Oklahoma where she went to college for Graphic Design. After graduating she went to work for United Entertainment as a Director of Graphic Design. Dori also worked for EMG Graphic Systems, Inc. for twelve years. During that time she met Mark Carey and was married in 1990. Dori was extremely talented with drawing and art design for companies and received many awards and recognition for her achievements. She was very well known in the graphic design profession and was sought out by many companies for her talent, skill, and vision for successful projects.

Dori had a great love for her cats. She was known to take in strays that needed love and care. She had a love for horses and loved watching the Kentucky Derby. Dori was a avid gardener and loved flowers. She always was willing to help anyone in need just as one of God’s servants. Dori truly loved the Lord, her family, and friends.

Dori was preceded in death by her father Daryl Johnson and brother Dean Johnson.

Funeral services for Dori Bowie will be held on Saturday, October 20th at 11:00 A.M. at Living Word Lutheran Church in Marshall, Minnesota. Pastor David Christenson will officiate. Intemrent will follow at the Marshall Cemetery.

A visitation will be held on Saturday morning, October 20th from 9:00 A.M. until time of services at the church.

Honorary Pallbearer will be Craig Schoen.

Dori was a member of The Flandreau Santee Sioux Tribe.