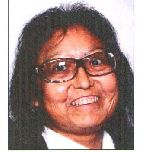 Donna Marie (Martin) Prentice, age 51, of Red Lake entered the Spirit World Wednesday, May 22, 2013 at the JPECC surrounded by family.

Donna was born September 12, 1961 to Marian and Charles Martin Sr. in Red Lake, MN. She grew up and attended school in Red Lake, graduating high school in June, 1979. Donna worked several different jobs including; Secretarial, Alcohol Rehab, Comp. Health Services, JPECC and was also an LPN. She married Charles Prentice Sr. on June 5th, 1993. She had two biological sons; Jeremy and Michael Martin Sr., two step children who she raised as her own; Paula and Charles Prentice Jr., she and her husband also had a special grandson Jeremy “Sonny” Martin Jr., who they raised. Together they had seventeen grandchildren and two great-grandchildren. Donna enjoyed spending time with her family, especially her grandchildren. She liked going to the casino, listening to music and hanging out on her back yard deck. For holidays Donna would cook and invite family to her house, she was close with her parents and siblings. She had a lot of friends, was very well liked and will be missed by many.

Funeral services for Donna Marie Prentice will be held on Tuesday, May 28th, 2013 at 10:00 A.M. at The Little Rock Community Center in Red Lake. Father Jerry Rogers will be the Celebrant and Spiritual Leader Steve Jackson will officiate.