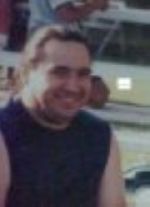 Donald “Juno” James Pankow Jr. Meshabesha (meaning Lion) age 51, Journeyed to the Spirit World on Wednesday November 27th, 2013 at Altru Hospital in Grand Forks, ND surrounded by family.
Juno was born in Minneapolis, Minnesota the son of Angeline Fastwolf and Donald Pankow Sr.
Juno was raised in St. Louis Park, Minnesota. Juno moved to Ponemah, Minnesota and made that his home until moving to Warroad, Minnesota where he met his soulmate Andrea Trottier and has lived for the past twenty- two years. Andrea and Juno were married in Roseau, Minnesota and raised six children together in Warroad, Minnesota.
Juno has worked for Seven Clans Casino Warroad for many many years. Juno also enjoyed spending most of his free time with his children and grandchildren. He was a very dedicated father and grandfather and they were his pride and joy.