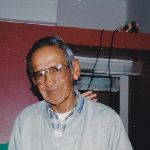 He was born February 15, 1933 to Julia (Johnson) and Frank Lajeunesse in Red Lake. He graduated from the Red Lake High School in 1951. After high school he joined the United States Navy and served in the Korean War in 1951-1952. After serving in the Navy he went on to Haskell University before returning back to the Navy. Donald moved back to Minnesota where he later received a heating/air conditioning certificate. Donald moved back to Red Lake to work for the Red Lake Hospital as a maintenance worker for many years until he retired. Donald adopted and raised his grandson. He moved to the Jourdain/Perpich nursing home in 2012 where lived until he journeyed on to the spirit world.

He enjoyed going to the Red Lake and Ponemah pow-wows every year, Bingo, Red white and Blue 7’s slot machines and dancing. He also enjoyed watching his grandchildren grow up and being with his family.

He is preceded in death by: His parents, Sisters: Marian, Patricia, Dorothy, and Barbara Needham; Brothers: James, Marvin, Robert, Loren, and Maynard Needham and a Great Grandson Deshaun Iceman-Needham.

Funeral services will be held at 10 AM on Monday, March 25, 2013 at the Redby Community Center with Father Jerry Rogers officiating. Dinner will be served prior to services. Burial set at a later date following cremation.