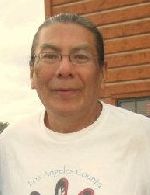 Donald Jay “DJ” Bissonette, age 59, of Hopkins, Minnesota journeyed to the Spirit World surrounded by family and loved ones on Sunday June 2nd, 2013 at The Methodist Hospital.

He was born and raised in Kyle, SD and was an enrolled member of the Oglala Sioux Tribe. He served in the Army from 1973-1978. He later became a long-time resident of Minneapolis, MN where he was a fifteen-year employee at Catholic Charities helping homeless people. DJ has been a Sun dancer for eight years.

He is preceded in death by his parents Jackson Sr. and Sylvia; brothers: Jackson Jr., Clement and Steven.

A Memorial service will be held at Sacred Heart Catholic Church in Kyle, SD in the afternoon on Sunday June 9, 2013 at 1:00 P.M.