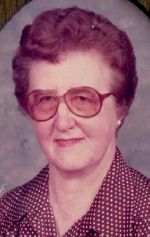 She was born on March 9, 1914, in Victor Township, Wright County, MN, the daughter of Albert and Lucy Lueck Aritt.

Delphine was formerly employed at Jim’s Red Owl in Winsted as a cashier. She was employed there by the Paradis family for thirty-four years.

She worked until seventy years of age, despite being diagnosed with Parkinsons at age forty four. Delphine was also legally blind for the past eleven years.

Delphine had a great sense of humor, loved to play cards, was kind, honest and liked to help the handicapped. She had been a resident of St. Mary’s since November 20, 2009.

She was a faithful member of Holy Trinity Catholic Church in Winsted and belonged to C.C.W. and St. Anne’s Society.

Preceded in death by her parents, a brother: Wilbur “Bud” Aritt and by a nephew: Douglas Cantin.

Mass of Christian Burial for Delphine Aritt was held on Wednesday, October 13th at 10:30 A.M. at Holy Trinity Catholic Church in Winsted. Father Tony Hesse will be the Celebrant.