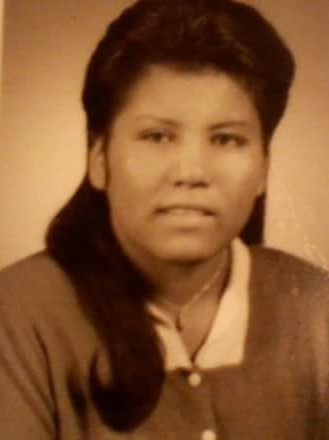 She was born on August 5, 1947 to Helen L. Eagle and Nathan Wilson of Sisseton, SD.  Delores lived her younger years in Sisseton, during the summer she would spend it in Little Eagle, SD with her aunty Angeline Little Eagle and her two cousins, Louis Foote and Ruby Shoestring.  In her younger years, she was a Men’s Fancy Dancer and her dancing partner was Sylvester Yellow Back.

Delores graduated from Sisseton High School on June 1, 1966 with her best friend, Yvonne Bear.  After high school she attended Haskell Indian Nation University in Lawrence, KS and graduated in 1968.  After attending school, she moved to Los Angeles, CA.  During this time, she met Sam Kee Begay (Joe Bahe).  They were married in Wheaton, MN in 1969.  To this union they had four children and an infant son who went to be an angel.  Daughters Elvonna Begay, Misty Begay, Robin Begay; son Paul Wilson Begay; and infant son Emerson Sam Begay.

On July 25, 1972 Delores started working for Sisseton Wahpeton Alcoholism Program; that started her career for working for the tribe.  She held various positions.  On May 17, 2007, she began working with Sharon Rice as the Assistant Recording Secretary for the Tribe.  After Sharon’s retirement, Delores became the full time Recording Secretary.  Delores worked until April 11, 2011, she then retired and stayed home to take care of her grandchildren – who named her Grandma D Lo.

In the summer of 1985, Delores met Terry Larson.  Every time you saw Terry driving around, she was sitting right next to him.  On October 16, 1999, Delores married Terry and their life began as one.  She loved Terry with all her heart.

Funeral services for Delores Larson will be held on Thursday, May 20, 2021 at 10:00 AM at St. Kateri Church Hall.  Jerome Renville and Tim Brown will officiate.  Interment will be held at Sisseton Wahpeton Oyate Cemetery, Goodwill Township, Agency Village, SD.