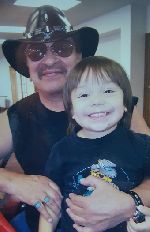 He was born on December 14, 1947 in Wagner, South Dakota the son of Leonard Stansbury and Vivian M. Williams. He grew up in Sioux Falls, South Dakota and attended Sioux Falls Public School.

He honorably served his Country in the United States Army serving in Vietnam from 1967-1969.

He moved to Flandreau, South Dakota in 1979.
He was formerly employed as a custodian at The Flandreau Santee Sioux Tribe. He worked a good portion of his life for FSST.

David played softball and was a fan of football. He lived for his grandkids! He loved to travel with Wacipi’s .

Preceded in death by a daughter Kristi Williams, his parents Leonard & Vivian Stansbury and by a brother Dennis Stansbury.

Funeral services for David Williams will be held on Monday, February 18, 2019 at 11:00 A.M. at The Eastman Hall in Flandreau, South Dakota. Officiating will be Joe Circle Bear, J C Crawford and CRE, Gerald Heminger Jr.

A Wake will be held on Sunday, February 17th beginning at 7:00 P.M. to all night at The Eastman Hall in Flandreau, South Dakota.

Honorary Casket Bearers will be: All his family and friends, All of Gordon Weston Post, Dawn Bucher, Delores Allen, Annie Gargia and Lavonna “Bunny” Allen.