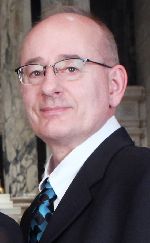 He was born in Glencoe, MN February 24, 1952 the son of Elmer and Catherine (Donnay) Kutz.

David was Baptized, had his First Communion and was Confirmed all at Holy Trinity Catholic Church in Winsted.

On June 3, 1977, David K. Kutz and Barbara A. Koch were joined in holy marriage at Holy Trinity Catholic Church in Winsted. God blessed their marriage with a son, Aaron.

He was employed in manufacturing for forty years. In his younger days, he enjoyed working on cars and following Aaron’s athletic games, especially hockey games. David was a hard worker and was fond of gardening and traveling. Following being diagnosed with ALS, HE consoled US with a positive attitude and a dry sense of humor. David was an example for us on how to live life!

Preceded in death by his parents, brothers Bill Woollard and Larry Kutz; father-in-law and mother-in-law Vern and Marietta Koch; a brother-in-law Michael Koch; and by a nephew Mark Kutz.

Urn bearer will be David Haroldson.

In lieu of flowers, memorials preferred to The Jack Norton Family Respite Program.