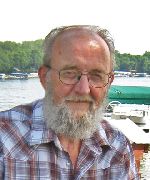 David Arthur Rosenau, age 70, was born on December 17, 1944 in New Ulm, Minnesota, the son of Emil and Florence (Dommer) Rosenau.

He passed away peacefully on December 17, 2014, his 70th birthday, after a hard-fought battle with cancer. He was baptized as an infant and confirmed as a youth at Wellington Church in Fairfax, Minnesota.

He joined the army in 1965 and served in Germany as a heavy equipment operator.

David grew up in a family of 11 children and attended school in Klossner, New Ulm, and Fairfax. He spent much of his time helping on the farm of his grandparents. As a young adult, David enjoyed going to country western dances and shows at Lake Marion Ballroom.

David was united in marriage to Lynette Markgraf on June 5, 1971. Together, David and Lynette shared 43 years, making their home in Lester Prairie, Minnesota.

David worked mostly in the construction field, working for Lester’s and Radtke Construction, then breaking off on his own to side houses. Later in life, he was well known for doing scrap metal and would gladly cut up and haul away anything metal, from a bicycle to large farm equipment.

He enjoyed old westerns on TV and was always hoping to win the “big one” on scratch-off lottery tickets or the Daily Three. David had a big heart and was full of love and sometimes, mischief. His biggest passion, however, was his grandchildren. David loved being a father and grandfather. He visited or talked to his boys most days and never did a week pass without talking to them at least a few times. He played an active role in each of their lives, playing with and teasing the grandchildren, encouraging them, sharing in their accomplishments. He was always ready with a smile and a hug.

David was a very strong man and fought hard after the diagnosis of his health problems. He had several dangerous surgeries and always managed to bounce back from them, even when the odds were not in his favor. His strength and perseverance were greatly admired by family and friends alike.

He is preceded in death by his parents, Emil and Florence Rosenau, brother Melvin Rosenau, father- and mother-in-law Carl and Rose Markgraf, brother-in-law Bruce Markgraf, and sister-in-law Patricia Markgraf.

A Mass of Christian Burial is scheduled for Monday, December 22nd at 11 am at Holy Trinity Catholic Church in Winsted, Minnesota, with a viewing from 9-11 am prior to the service.

Visitation will be Sunday, December 21 from 5-8 pm at Chilson Funeral Home in Winsted.

Chilson Funeral Home of Winsted is handling the arrangements.