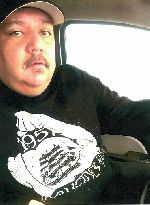 Daniel James Hochstetler Simon, age 45, Journeyed to the Spirit World on Saturday, October 19, 2019 at Coteau Des Prairies Hospital in Sisseton, South Dakota.
Danny was born October 21st 1973 to Christina and Filmore Simon and Michael Hochstetler. In St. Croix Falls, Wisconsin. Danny grew up with his siblings Lee, Ricky and Joanna, Alan and Katrina. As a young boy Danny loved to play with his car’s he loved taking his cars apart and putting them back together. Danny collected so many cars throughout his childhood life until this day. Danny also loved to fish with his dad Michael and two brothers Lee and Ricky. Danny would say his dad would wake him and his brothers up early in the morning to go fishing. Danny wasn’t a morning person so his dad would yell at him and say “Danny you have one more chance to get your butt up and get in the car!” Pretty soon Danny was running down the road chasing after his dad and brothers. Danny also love to tease his brothers and sisters. Danny attended school at Jenny lind school in Minneapolis and also attended Anderson contemporary from there in 1986 Danny moved to Sisseton, SD with his parents and siblings. June of 1986 Danny moved to Veblen, SD with his family. When Danny grew older, he attended Tiospa Tribal School and joined a drum group called “Young Nations.” Danny got baptized and accepted Jesus into his heart at 7 years old along with his siblings. Throughout Danny’s life growing up on the reservation Danny met very many friends who became family. In 1995 he met his soulmate Lindsay and they were united in marriage in 1997 they established their home in Sisseton. Through their love their family grew with five beautiful children and four grand-children. Danny worked at Dakota Western and shared his leadership skills and confidence were Danny grew with the company into plant manager for 13 years to provide for his family. Danny’s favorite thing to do with his boys was fishing and teaching them how to work on cars he loves his family, he enjoyed just being around his wife and children that was his life, and his world. His goal was to enjoy watching his family grow. Danny’s wife was his companion and best friend who he loved dearly. Danny’s favorite with his wife was date nights, Guadalajara’s is Danny and Lindsay’s favorite restaurant and the casino. (Danny sure loved to push those buttons.) Danny’s oldest daughter blessed him with four beautiful grand-babies that he loved and adored very much. Danny has many nieces and nephews he enjoyed hanging out with and became a huge role model and father figure in each of their lives. He blessed his family with a huge impact full of spiritual love and knowledge. Danny’s memory will live on through each and every one of us, we love you and you will be missed every day. Love your wife, kids, grandbabies, family and friends.
Survived by his loving wife: Lindsay; children: Shanice, Jason, Jronn, Alex and Amelia; grandchildren: Sophia, Dion Jr., Layla and Tyler; his parents: Christina & Filmore Simon; siblings: Lee Simon Sr., Joanna Johnson, Alan Simon, Katrina Simon, Michael Hochstetler, Marlow Hochstetler, Montel Hochstetler, Maresha Hochstetler and Mykeyla Hochstetler; a host of other relatives and friends.
Preceded in death by his natural father Michael Hochstetler, a brother Ricky Simon, grandmother Bisilia DelCastillo and grandfather Ruben DelCastillo.
An all night wake will be held on Wednesday, October 23rd at St. Kateri Tekawitha Parish in Sisseton, South Dakota.
Funeral Services for Daniel James Simon will be held on Thursday, October 24th at 2:00 P.M. at St. Kateri Tekawitha Parish. Vern Donnell, Filmore Simon and The Episcopal Lay Readers will officiate.
The Drum group will be “Old Agency Singers”
Honorary Casket Bearers will be Glen German Sr., Filmore Simon, Tom Adams, Cody Toutges, Alex Simon, Julien Barse, Michael Hochstetler, Marlowe Hochstetler, Montel Hochstetler, Josh Laughter and all his family and friends.
Casket Bearers will be Glen German Jr., Johnny German, Logan Grimm, Isiah Grimm, Lee Simon Sr., Lee Simon Jr., Richard Simon, Jronn Simon, Anthony Locke and Alan Simon.