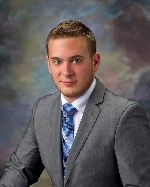 Daniel Bodin Chilson, age 23, of Silver Lake, Minnesota and formerly of Winsted passed away on Sunday, June 1st, 2014 at his residence following a nine year struggle with depression.

Daniel graduated from Holy Trinity High School in 2008. He attended St. Cloud State University for two and a half years and transferred to The University of Minnesota graduating on May 17th, 2013 from The Mortuary Science Program. Daniel was a licensed funeral director and embalmer.

Daniel was employed with his parents at The Chilson Holdings, LLC dba The Peterson Chapel in Buffalo & St. Michael, Chilson Funeral Home in Winsted and Maresh Funeral Home in Silver Lake, Minnesota.

Daniel was a very hard worker! He enjoyed, as everyone knows, mowing all the lawns at the funeral homes, hanging out with friends, working on his truck and constantly washing it.

Dan was a member of St. John’s Evangelical Lutheran Church in Winsted.

Organist for the funeral will be Molly Loder and soloists will be Pastor Mark Loder and their daughter Mara Loder.

A visitation will be held on Sunday, June 8th, 2014 from 2-8 P.M. at The Chilson Funeral Home in Winsted, Minnesota.