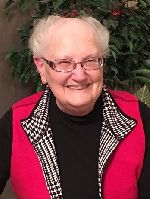 Daisy Ardell Binder, age 88, of Winsted, MN passed away early Monday morning, January 21, 2019 at St. Mary’s Care Center in Winsted with all her children by her side.

Daisy graduated from Howard Lake High School where she was part of the drumline in the marching band. On June 6, 1950, she married Leonard Lachermeier. Leonard and Daisy had six children and farmed in Winsted until 1971.

On March 11, 1977, she was remarried to George Binder who she met through the Big Brother program. They were married for sixteen years until George’s death in 1993.

Daisy worked hard over the years at many places including Ittel’s Meats, Winsted Theatre, Blue Note, Custer’s Super Value and Mid-Am. Her last employment was Keaveny Drug Store in Winsted, where she worked part time for over twenty-five years and was still working up until her death.

Daisy enjoyed tending to her flowers, reading, eating out, family gatherings and working.

Annually, more than 60 of Daisy’s children, grandchildren, great grandchildren and spouses gather for the “Bunches of Daisies” reunion. This fun tradition will continue!

On Thursday, January 10, Daisy was blessed and pleased to hear the news of the birth of her first great, great grandchild, Kaden Leo Sanchez, marking a rare occurrence of five living generations.

A Mass of Christian Burial for Daisy Binder will be held on Thursday, January 24th, 2019 11:00 A.M. Holy Trinity Catholic Church in Winsted. Father Michael Doyle will be the Celebrant. Lavon Kielkucki will be the organist for the Mass.

A visitation will be held on Thursday, January 24th AT THE CHURCH 9:00 A.M.-time of Mass.