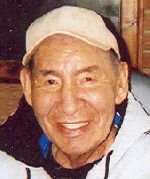 He attended Old Agency Day School, and Wahpeton Indian School. Cyril attended the Vo-Tech School for Heavy Equipment Operator, after graduating from there he traveled various places for road construction, and he also drove semi-truck for Landsberger Creamery for a number of years. Cyril had to retire shortly after suffering from a severe stroke. After regaining his health Cyril loved to work on cars and also loved to work in his garden every summer. Cyril also had to have hip surgery, which caused him to retire from his gardening, and to enter the Tekawitha Living Center for physical therapy. He then moved back to his apartments across the Tekawitha Living Center. Cyril had to have a total hip replacement for the second time, and this was why he re-entered the Tekawitha Living Center, which was his home until his passing. Cyril left peacefully in his sleep. Cyril was also an active member of St. Mary’s Episcopal Church.

Cyril was preceded in death by his parents, 1 brother, 1 niece, and 1 stepdaughter.

Honorary Casket Bearers were all of Cyril’s family, friends and relatives.