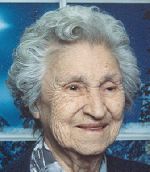 Cordelia Isabelle (Bagley) Hatlen ‘Aychewazhid Cahgayiguning Ikwe’ (Flies Across the Water Woman), age 90, passed on to the spirit world on August 9, 2009 at home surrounded by her family in Minneapolis, Minnesota.

She was born on September 8, 1918 in a wild rice camp near Ponsford, Minnesota to Michael and Louisa (Hanks) Bagley. She married Fred Hatlen in December 1950 and they spent their lives together raising their children, many nieces, nephews and grandchildren in Ponsford, MN and Redby, MN until he passed away. Cordelia then spent her time in Bemidji, Detroit Lakes and Minneapolis with her children and grandchildren. She enjoyed going to the casino, speaking the Ojibwa language, playing cards, traveling and especially enjoyed spending time with her grandchildren making each one feel special. She will be remembered for her quick witted wonderful sense of humor. She was loved, respected and known by many as “Granny”, putting a smile on everyone’s face she met.

She was preceded in death by her husband, five brothers, one sister and a son: Samuel Skadsheim.