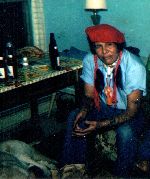 Clyde Nelson Philbrick, age 77, journeyed to the Spirit World on Sunday, April 19, 2015 at Prairie Lakes Health Care Hospital in Watertown, South Dakota.
He was born on May 5, 1937 in Santee, Nebraska the son of Lawrence Philbrick and Victoria Johnson.
Clyde lived in Minneapolis most of his life and taught at the Little Red School House in Minneapolis.
He honorably served his Country in The United States Navy during the Korean Era.
He was joined in marriage to Emmy.
In 1987, he moved to Newton, Iowa and lived there until 2013. He then moved to Sisseton. Two months before his death, he moved to Watertown, South Dakota.
Clyde liked to go to thrift stores, auctions and rummage sales. He was happy to be reunited with his son after twenty two years. He loved to ride his motorcycle. He was a life time member of A.I.M. Clyde loved his dogs, especially German Shepherds and Doberman Pinchers. He was a big hearted person and kind to everyone he met! Clyde liked to go to the Casino.