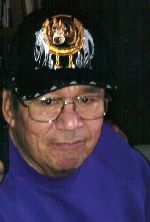 Clinton was born the son of Clinton Sr. and Julia (Bedeau) Bruce in Cass Lake on November 23, 1951.

Clinton attended school in Walker, MN. He then moved to Dallas, TX in 1965 with his brother William David Bruce. Clinton attended Arcadia Park School during his teenage years until returning to MN in 1969.

His working began in the upholstery business in Minneapolis until he moved back to Waker in 1975. He then worked for the Minnesota Forestry Service and Fortune Bay Casino at various times.

Clinton lived in Nevis, MN for many years with his special friend Diane Blakely and also raised two boys.

For enjoyment Clinton was an avid fisherman and sportsman, he also like playing the guitar.

He is preceded in death by his parents and siblings David, William, Henry, Kenneth, Suzanne and Daniel.