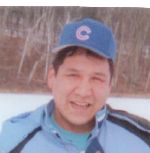 Cliff was born on March 23, 1970, to Betty Strong and Marvin Atkinson in Minneapolis, MN. He moved to northern Minnesota with his parents, Rosalyn and Vincent Keahna at the age of three, spending most of his time on the Leech Lake Reservation. He later moved to Elko, NV and returned to Cass Lake for his senior year of high school and worked at Tom’s Resort working with the fish house boys. In 1992, he moved to Minneapolis to work as a Union Roofer and he recently received his CDL license.

Clifford is survived by his mother and father: Betty and Marvin; his parents: Rose and Vince; brothers: Conrad, Canaan and Floyd; sisters: Tish, Sara and Rachel; nephews: Lil’ Conrad and Ike; nieces: Brandi, Gwen, Cleo, Grace, Della, Halle, Kaelyn and Cassidy; special friend: Matalia and the motel boys; many other relatives and friends that loved his smile and gentle nature. Cliff loved children and liked to play bingo and cards with all of his aunties. An outdoorsman, he loved to fish and hunt and also did a great impression of the late John Wind.

Interment will be held at Hillside Cemetery, Mpls.

The Chilson Funeral Home of Winsted, MN is proud to have served the family…