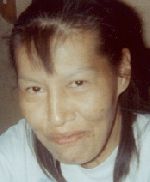 Claudette Faye Keeble, age 44 of Browns Valley, Minnesota journeyed to the Spirit World on Friday, April 24, 2009 as the result of an auto accident near Lake Traverse.

Claudette Faye Keeble was born to Ramona V. Kitto and Alfred G. Keeble on July 22, 1964-twin to Claude Keeble. She was raised on the Lake Traverse & Enemy Swim tiospaye. Claudette loved life and was a true Dakota. Her hobbies were card games, cooking, music, quilting, and just visiting her kodas. Her main joy was her grandchildren: Loren Jr., Lily Mae, & LaRon, and many others. Claudette went to school in Browns Valley until her graduation in 1982. She had a big heart for the elderly and worked in various nursing homes caring for them. She loved riding horses and watching her brothers ride in rodeos. She was especially close to her Aunt Vastana “Rocky” James. Claudette is survived by her three daughters: Navah Tyne of Browns Valley, Vastana Kaye of California, and Mikayla Faye of Hankinson, North Dakota; her twin Claude Ray of Sisseton, Nicolette Anne of Hankinson, North Dakota, George Michael of Santee, Nebraska, Fern Hope of Rosholt, Daniel Joseph of Fargo, Brandon Gabriel & Andrew David both of Sisseton, Charlotte Loretta & Tamara Lee both of Old Agency Village, Raymond Steven of Waubay, and Leonard Orville of Old Agency Village; a host of other relatives and friends. She was preceded in death by her grandparents Charles & Irene Kitto; her parents Alfred & Ramona Keeble; her uncle Earlwin Kitto; her brothers Adrian John and Joshua Eric.

She will be missed very much by her siblings, her children, her grandchildren, friends, and many more.