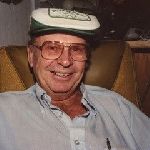 Visitation Information
AT THE CHURCH
Monday, March 12, 2018
One hour prior to Mass

On July 5, 1944, Clarence P. Laxen and Lidwina A. Fiecke were joined in holy marriage at Holy Trinity Catholic Church in Winsted. God blessed their marriage with four daughters.

Clarence was employed as a steamfitter at Sterner Industries in Winsted. He had a strong work ethic and a great sense of humor. Teasing his daughters and grandchildren was a favorite past time. Clarence and Lidwina spent ten winters in South Texas. They loved to travel and especially enjoyed spending time with their lifelong friends.

Clarence was a lifelong, faithful member of Holy Trinity Catholic Church in Winsted.

Preceded in death by his parents and two brothers Leonard and Robert Laxen.

A Mass of Christian Burial for Clarence Laxen will be held on Monday, March 12th, 2018 at 11:00 A.M. at Holy Trinity Catholic Church in Winsted. Father Tony Stubeda will be the Celebrant. Alice Nowak will be the organist for the Mass. Interment will follow at Holy Trinity Cemetery.

A visitation will be held on Monday, March 12th one hour prior to Mass at the church.

Urn Bearer will be Diane Green.