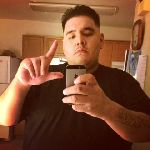 He was born on January 23, 1990 in Eau Claire, WI the son of Henry Whitethunder and Jerilyn Holden.

Cheyenne loved his family and spending time with them. He enjoyed going to Pow-Wows. He liked watching sports, especially football and basketball, he was a big Vikings fan. He enjoyed playing blackjack, cooking and traveling. He liked to “cruise” the Twin Cities.