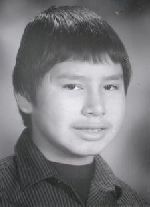 He was born on April 24, 1999 in Bemidji, Minnesota the son of Derrick Smith Sr. and Krista Fisherman.

Cedric was currently attending Red Lake Middle School. While attending Circle of Nations School in Whapeton, North Dakota, Cedric was an honor roll student and on the wrestling and football teams. He also enjoyed other sports while there. He accomplished a lot of awards and ribbons. Cedric was practicing learning how to play the piano and taking guitar lessons. He was well liked by staff & peers while he attended there. At home he liked to play his games on PS3 and Xbox 360, go on the computer, listen to music and text on his phone. Cedric loved spending time with his friends, but mostly his family. He was a proud big brother and a loving, respectful son. Cedric loved to joke and laugh and make people laugh! He always wanted to travel and go into the army when he got older. Cedric liked spending time with his mom, Dad and grandma Bev. He liked going to his moms to play and help with his little brothers and sisters. He enjoyed being cuddled and stories told to him at bedtime about his older brother: Derrick Jr. or when he was born.

Cedric will be missed by many and very much always loved by his family and friends!

Traditional funeral services for Cedric Smith will be held on Wednesday, October 30th at 3:00 P.M. at The Redby Community Center.

All night wakes will be held on Monday, October 28th and Tuesday, October 29th beginning at 2:00 P.M. at The Redby Community Center.