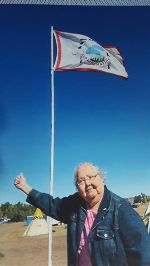 LISTEN UP…..
Roberta Ann Shohn, age 79, journeyed to the Spirit World on November 6, 2017. She was born on December 18 1937 in Red Lake, MN on the Red Lake Indian Reservation, the daughter of Robert Oliver (White Earth, MN) and Louisa Redcloud (Red Lake, MN). Roberta was a loving and strong woman with a big heart and contagious smile. She enjoyed powwows, traveling and visiting with loved ones. Roberta was an advocate for welfare rights and Indian issues; she was the first director of the Kansas City Indian Center, Kansas City, MO. In 1977, Roberta and her family moved to Minneapolis, MN where she was also active in the native community. Roberta retired from the Schapiro Center for MS after 17 years. She always had a smile on her face and will be missed dearly by all she has encountered and loved.
She is preceded in death by her parents and two grandchildren, Santiago and Kadence.
She is survived by five children: Maynard Needham (Helle) residing in Denmark, Robert, Karen and Steven (Julie Grey Eagle) Needham all of Minneapolis and Verlin (Ben) Wells of Welch, MN; 12 grandchildren; 7 great-grandchildren; and step-grandchildren living both on Turtle Island and in Europe. Further Native social relationships extend from relatives residing on teh Red Lake Indian Reservation and elsewhere on Turtle Island. All of these people were blessed with knowing her, caring about her and being loved and cared for by her.
All who knew her were welcomed into her home, fed, coffeed up and sent on their way with good energy and usually a smile on their faces. Many people who knew her, such as co-workers and Facebook friends, were blessed with contacts easily renewed even after the passing of years. Having fought for so many people through the years including not only Native issues, but social issues, it is with the deepest gratitude that the family wishes to thank all of those who sent spiritual prayers and energy for her well being.
As we send her on her next travels it is without regret because we know her relatives and ours are there to help her on her way.

So…..”LISTEN UP” If I neglected to mention you, please forgive me and remember her, not me. 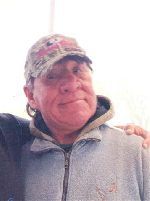 Arness was born to Ruth Titus and Donald Crawford on June 2, 1961in Sisseton, SD. He was raised in Buffalo Lake, SD by his maternal grandmother Grace along with his two brothers and two sisters. Arness attended Sisseton High School and continued his higher education at the Sisseton Wahpeton College in the Vocational program. He helped with the construction on the Veteran’s Memorial Gymnasium as well as other projects around the tribe while working toward his degree. Arness loved to hunt, fish and spend time with his family and friends. He was loved by all he met. Everywhere he went, he put a smile on someone’s face. He was a first language speaker and love to live in the natural realm close to nature. He will be remembered dearly by his family and close friends.

Funeral service for Arness Titus will be held on Saturday, November 11 at 10:00 am at the Buffalo Lake District Center. Rev. Enright Bighorn will officiate. Interment at Buffalo Lake Presbyterian Cemetery in Eden, SD. 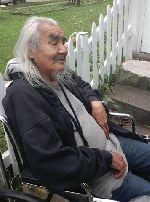 Stanley “Windy/Buddha/Stan Sr./Uncle/Dad/Grandpa” Strong, age 67, died at home on November 4 of natural causes. He was born June 25, 1950, in Nett Lake, MN, to Russell (Bun) Joseph Strong and Elsie Sam (Anishinabe Wedding Ceremony). Growing up, Stanley enjoyed playing the guitar, drawing and spending time with his siblings. He was particularly inseparable from his brother, Russell “Dinskey”, until he passed. Stanley’s passion, love and skill for drawing led him to Minnesota Drafting School to pursue Architectural Drafting. Stanley was known for his sense of humor. He kept you on your toes and engaged in any conversation you entered into with him. Stanley loved to joke, making everyone laugh and smile with his incredibly quick and witty comments. He lived in Minneapolis, MN where he enjoyed going on walks, reading, doing crossword puzzles, going to the movies, and faithfully attending the state fair. A recent hobby of Stanley’s was video gaming. He played online and met several new friends this way. The gamers would be surprised when they learned he was in his 60’s because he was such a great gamer for his age. It was not uncommon to have gamers message him offline just to talk to him because of his fun-spirited personality. He is survived by his sons: Stanley (his daughter Adriana); Jesse (his wife Sophia and daughter Solana); his sons’ mother Cheryl along with many nieces, nephews and cousins.
Stanley was preceded in death by his parents; and siblings: Roselyn “Rosey” Strong, Gail “Babe” Strong and Russell “Russ” Strong.

Bill was born September 2nd, 1931 in Pocahontas, Iowa to Harry and Hattie (Harriet Lambertson) Carlson, the sixth of 12 children.

In 1941 the Carlsons moved to Hector, Minnesota, where Bill helped on the family farm and attended high school, graduating in 1950. He was active in F.F.A., sports, band and developing his lifelong love of music.

Bill married Lois Lindekugel in 1952 and they were blessed with 8 children. They lived in several Minnesota communities until Bill’s retirement, when they settled south of Annandale.

He was employed as a machinist and welder. Bill was known as a hard worker, who took pride in what he built. Other hobbies included wood working, gardening, and genealogy. Bill also enjoyed western movies and was a John Wayne fan. His interest in music included classical, big band marches, ballads, and in later years he was especially fond of Celtic music which seemed comforting to him as he struggled with Alzheimer’s and complications after his stroke.

Bill will be remembered for being a loving husband, father, grandfather and having a “green thumb”. He had a delightful and dry sense of humor!

Private interment will be this coming spring at The Hector City Cemetery in Hector, Minnesota.
Memorials are preferred to the Alzheimer’s Association or The American Heart Association. 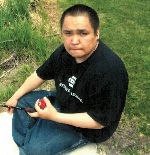 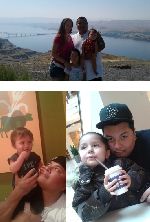 Robert was a loving and caring son, father, uncle, nephew and friend. He was a humorous person who was always laughing. Robert enjoyed his work in Seattle as a chef and laborer. He also enjoyed car rides, traveling to Pow Wows, music, traditional dancing, and time spent with his children, family and friends.