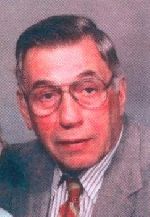 Casimir Joseph “Casey” Stifter, age 83 of Winsted, passed away Saturday May 8th, 2010, at St. Mary’s Senior Living Center in Winsted, with his family at his side.

Casey was born on March 4th, 1927, the son of Edward and Gisella (Windisch) Stifter in Winsted Twp., MN.

He was united in marriage to the love of his life, Mary Irene (Keefe) on June 25th, 1949, at Holy Trinity Catholic Church in Winsted, MN.

Casey grew up in Winsted graduating from Holy Trinity Catholic School. He then attended the University of Minnesota Agricultural School.
Casey served in the U.S. Army in the 6th Infantry division. He worked hard to provide for his family. He made sure to instill in his children the importance of family. In retirement he gave back to the earth by planting and caring for many hundreds of trees on his farm. Casey belonged to the American Legion, V.F.W. and the Knights of Columbus. He loved music, hiking and traveling. His grandchildren were the light of his life!

Mass of Christian Burial Thursday May 13th, 2010, at 10:30 AM Holy Trinity Catholic Church in Winsted visitation 1 hr prior at the
Funeral Home and 4-7 PM Wednesday, with the Knights of Columbus reciting the Rosary at 5:45.