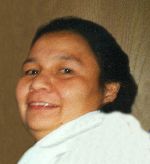 She was born on July 24, 1963 in Ponemah, MN where she was raised for a short time before her family moved to Minneapolis. She later returned to Ponemah where she lived up until the time she was hosptitalized. Carol enjoyed spending time with her family and friends, listening to music, reading, doing crossword puzzles and cooking.

Funeral service for Carol Patterson will be held on Thursday, June 19, 2014 at 2:00 PM at the Boys and Girls Club in Ponemah. Steve Jackson will officiate.