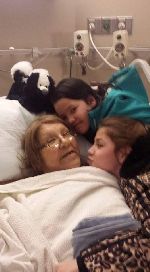 She was born on August 16, 1948 in Sisseton, SD the daughter of Virgil and Cora (Brant) White Sr.

Carol attended school in Crow Creek, Sisseton, and Plankington, SD. She then attended the Job Corps at Excelsior Springs in Missouri for Nursing. She then worked at various nursing jobs in Sisseton, Minneapolis and Plymouth, MN. She moved back to Sisseton in the early 1990’s to take care of her Grandma Annie One Road Shields.

She loved cooking and cooked for the Buffalo Lake District and ran an Indian Taco Stand at the Pow-Wow for 14 years. Her last job was managing/cooking at the Warcloud Drop In Center where she retired in 2014. Her most important job she had was the last 10 years of her life, helping to raise her grandkids.

Carol’s grandchildren were her life. Her pride and joy was her church family and bingo.

Carol lost a long, hard-fought battle with cancer and will be greatly missed by her grandkids and family.

She is preceded in death by her parents Virgil White Sr. and Cora Brant White; grandmothers Annie One Road Shields and Ella White and two brothers Arnold White Sr. and Ernest White.

Funeral services for Carol Ann White will be held at 10:00 AM on Thursday, May 19, 2016 at the Christian Outreach Center in Sisseton, SD. Pastor Fearing will officiate.

An all-night wake will be held on Wednesday, May 18, 2016 beginning at 7:00 PM at the Christian Outreach Center.

Interment will be held at Goodwill Presbyterian Cemetery in Old Agency Village, SD.