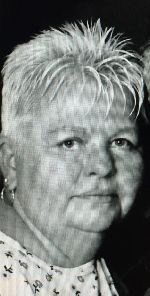 Carol Ann Jewett, age 66, of rural Waverly passed away on Friday, February 26, 2016 at The Buffalo Hospital.

She was born on December 1, 1949 in Winsted the daughter of Marvin & Isabelle (Remer) Lindenberg.

Carol was employed at MillCreek in Buffalo as a pull tab clerk. She enjoyed selling pull tabs!

Survived by her sisters: Delores (Gerald) Anderson of Maple Grove, Diane Grangroth and Mary (Lyle) Hirsch all of Howard Lake; many nieces, nephews, other relatives and many friends.

A visitation for Carol Ann Jewett will be held on Friday, March 4th, 2016 at The Chilson Funeral Home in Winsted from 11:00 A.M.-1:00 P.M.
Private Interment Lakeview Cemetery in Buffalo.