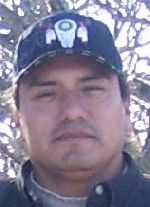 Carl Henry was born on June 9, 1967 to Carl Sr. and Marie M. Bear, in Sisseton. When the Community Center in Old Agency Village first began, Carl (known to many as “Jr.”), was its caretaker. He later did maintenance work for Dakota Magic Casino in Hankinson, North Dakota. A doting great-uncle, Carl loved spending time with family, motorcycle riding, playing basketball, and taking care of media electronics.

The Funeral service will be Saturday, October 24, 2009 at 1:00 P.M. at The Community Center in Old Agency Village, South Dakota. Reverend Enright Bighorn will officiate. The Interment will be at Long Hollow Presbyterian Cemetery. The wake will begin at The Community Center on Thursday, October 22nd with a service at 7:00 P.M. On Friday, an all night wake will begin with a 7:00 P.M. service.

The Chilson Funeral Home of Winsted served the family.