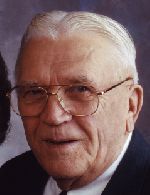 He was born on September 26, 1924 in Victor Township, Wright County the son of Herman & Sophia “Lena” Loebertmann Deidrick.

Calvin honorably served his Country in The United States Army during World War II. He was a Purple Heart recipient and a former P.O.W. taken at The Battle of the Bulge.

On November 28, 1946, Calvin H. Deidrick and Ruth M. Strandquist were joined in Holy marriage at The Oster Covenant Church in rural Waverly. God blessed their marriage with two children.

Calvin & Ruth engaged in dairy farming in Woodland Township, Wright County for many years. He bred and showed Calrick Registered Holsteins. Kelly often showed his dairy cattle at The Wright County Fair in Howard Lake. He also, had the privilege of showing Calrick Holsteins at The National Dairy Cattle Congress in Waterloo, Iowa and at The World Dairy Expo in Madison, Wisconsin.

Kelly enjoyed fishing, having fished a lot of the area lakes, hunting, traveling and family vacations up north.

Calvin loved his family! He was known for his good sense of humor!

He was a faithful member of The Oster Covenant Church where he through the years, served his church having held several positions. Calvin formerly was on The Lake Ida School Board District #2681, represented Woodland Township on The Winsted Fire Board, was a longtime 4-H Leader and belonged to American Legion Post # 407 in Winsted.