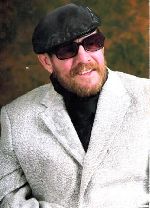 He was born on November 6, 1957 in Minneapolis the son of Levi & Martha Falde.

Bruce honorably served his Country in The United States Army.

Bruce was formerly employed in assembly at Landscape Structures in Delano.

Funeral services for Bruce “Moon” Falde will be held on Sunday, March 17th at 2:00 P.M. at The Chilson Funeral Home in Winsted. Father Eugene Brown will officiate.

A time of gathering will be held on Sunday, March 17th from 12 Noon until time of services at the funeral home.