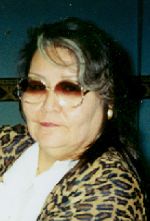 She was born July 29, 1958 in Sisseton, South Dakota to the late Rosemary Donna Rederth and Lloyd Vincent Crow Sr. She was the grand daughter of Caroline Zollie (Allen) and Arthur Daniel Rederth Sr. Brenda attended school at Spafford Elementary, Canova Grade School and graduated from Flandreau High School. She later attended and graduated after studying accounting from Black Hills State College and Pipestone Vo-Tech. The late LaVern and Irma Duck were Brenda’s Foster Parents and stayed in touch with her until their passing. While in school, Brenda enjoyed several activities but was especially pleased with the fact that she took first place in Madison, South Dakota playing her clarinet. Brenda and Glenn’s favorite was baling hay with LaVern. Through out Brenda’s life, she worked several years in and for her Tribe, both professionally and in a civil capacity. Professionally she was 1st American Mart Manager, Health Clinic Maintenance and Youth Supervisor for the Flandreau Santee Sioux Tribe. Civilly, she was constantly active with her peers and in the community. Her home was the designated “Homeless Shelter” for all who needed a home and not one was left hungry. She was always someone’s sister, mom, grandma, auntie or a very good friend. All her life, Brenda was a top of the line craftsman with her pipestone carvings and Native Beadwork. Because of her cultural beliefs, Brenda got “Permission” to work with our Sacred pipestone as it was part of her livelihood. Brenda married Gregg Eugene Nelson in 1977 and from this union, Brenda became the mother of two beautiful, wonderful gifts from God (as Brenda stated it) called Nicole Rose Nelson and Skye Lynn Nelson.

She was preceded in death by her parents, grandparents, aunts and uncles.

All night wakes were held on Thursday, June 19th and Friday, June 20th beginning at 7:00 P.M. at Eastman Hall.

“How Great Thou Art”