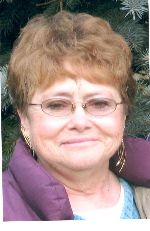 Visitation Information
AT THE CHURCH
Tuesday, December 30, 2014
One hour prior to Mass

Betty Ann Kern, age 64, of Cokato passed away on Wednesday, December 24, 2014 at The Cokato Manor.
She was born on October 23, 1950 the daughter of Raymond & Zoa (LaMott) Loew.
Betty enjoyed gardening, canning, spending time with her grandchildren, fishing, camp fires, quilting and shopping.
Survived by children: Cari (Paul) Gaines of Hutchinson, Chris Kern of Cokato and Charlie Kern (Susan Burda) of Litchfield; grandchildren: Justin, Darrin (Kate), Brandon & Alex Bebo and Nick & Zach Kern; her mother: Zoa Fasching of Winsted; sisters: Beatrice (Doug) Rhode of Emily and Peggy (Tony) Lachermeier of Waverly; many other relatives and friends.
Preceded in death by her father, brothers: Tom & Bob Loew, grandmother: Elizabeth LaMott and by a niece: Dawn Loew.
A Mass of Christian Burial for Betty Kern will be held on Tuesday, December 30th, 2014 at 10:30 A.M. at Holy Trinity Catholic Church in Winsted. Father Tony Stubeda will be the Celebrant.
A time of gathering will be held on Tuesday, December 30th one hour prior to Mass at the church.
The Chilson Funeral Home in Winsted is serving the family. Online condolences may be made to www.chilsonfuneralhome.com