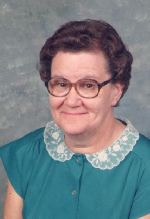 She was born on April 25, 1922 in Hale Township, McLeod County to Frank and Josephine (Pawlak) Lewandowski. She was baptized and confirmed at St. Adalbert’s Church in Silver Lake, MN. She attended District #25 Pleasant Hill School.

On September 4, 1944 she married Leo Strauss and their marriage was blessed with four children.

Bernice worked at Tonka Toys in Mound, MN for 15 years, she did house cleaning and also cleaned the Winsted Clinic for Dr. Kiefer for 17 years. Bernice was a longtime volunteer at St. Mary’s Nursing Home. She belonged to the Catholic Order of Foresters, St. Anne’s Society, St. Mary’s Auxillary and Holy Trinity CCW. Bernice loved gardening, cooking, baking and house cleaning. She also enjoyed quilting with the quilters and spending time with her grandchildren and great-grandchildren.

Mass of Christian Burial will be held at 11:00 A.M. on Monday, September 8, 2014 at Holy Trinity Catholic Church in Winsted, MN. Father Paul Schumacher will be the celebrant.

Visitation will be held on Monday beginning at 9:00 AM at Holy Trinity Catholic Church.

Interment will be held at Holy Trinity Catholic Cemetery.