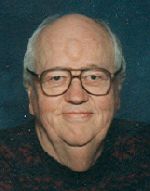 Bernie was born on October 16, 1934 in Victor Township to Raymond Martin and Clara Annie (nee Habisch) Kieser. He was raised in the Winsted area and belonged to Holy Trinity Catholic Church of Winsted, where he was both baptized and confirmed, and attended the church’s school. At the age of 18 months, Bernie won second place in a beautiful baby contest.

Bernie entered the U.S. Army in 1955 and was trained as a sharpshooter. He won second place in an Army marksmanship competition. He also earned his GED certificate while in the service.

After he returned home, Bernie began working for Tonka Toys Incorporated in Mound, where he worked for over 20 years. For a few years, Bernie worked for Litton Microwave and then for Tool Products. He retired at the age of 66, from Cedar Lake Engineering in Maple Lake where he worked for a number of years.

On December 28, 1963, Bernie married Deanna Ruth Berger whom he met while working for Tonka. Their wedding was held at St. Mary’s Catholic Church in Waverly where they resided and raised their family. He became an active member of the church, serving as an usher. Bernie and Deanna were blessed with four children and seven grandchildren as well as many foster children over the years.

An easy-going man, Bernie loved his role as a husband, dad, and grandpa to his wife, kids, and grandkids. When asked, he was willing to help in any way. He loved nature, whether it be hunting, fishing, or just looking out of their Waverly Lake home they enjoyed for nearly 45 years. He loved gardening and sharing his produce with family and neighbors. He also enjoyed football, puzzles, and reading the paper and outdoor magazines. A quick witted man, Bernie enjoyed the times he and his wife spent with friends on various trips and going to Grand Rapids to Johnson Lake.

Bernard Kieser is survived by his wife, Deanna, of Paynesville; children: Robert “Bob” and his wife Eunice, of Plymouth, Donna and her husband Chuck Strickland, of Monticello, Linda and her husband Jody Gueningsman, of South Haven, Timothy “Tim”, of Paynesville; brother, Raymond Kieser, of St. Paul; sister, Diane Hughes, of Lonsdale; aunt, Rosella Remer, of Winsted; uncles: Eddie Habisch, of Alexandria, and Alfred Habisch, of Moose Lake; seven grandchildren: Ryan and Erika Kieser, Cole and Alex Gueningsman, and Alysha, Jaden, and Shalyn Strickland; many foster children including Molly McCellan and Karrie Wymer; nieces, nephews, and other relatives. He was preceded in death by his parents, aunts, uncles, and recently, sister-in-law Kathy Kieser.

A Memorial Mass will be held 11:00 A.M. Friday, January 4, 2008 at Holy Trinity Catholic Church, Celebrated by Father Bill Sprigler. Visitation is two hours before the Mass. Honorary Bearers are Bernie’s grandchildren. Inurnment will follow the Mass at Holy Trinity Cemetery in Winsted with the American Legion Post 407 providing Military Honors.