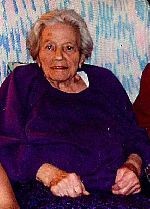 She was born on December 26, 1913 in Oak Pointe, Minnesota the daughter of Jules & Emma Mandeville Poirier.

Bernadette was baptized as a young baby in Baudette and confirmed at the age of twelve years in 1925 in Waverly, Minnesota.

She spent her early years in Waverly doing many jobs before moving to Minneapolis/St. Paul at the age of thirteen. She returned to Waverly after five years to become a midwife to expectant mothers.

Bernie met her husband Lawrence Derosier and married in 1937. They moved to Hopkins with three young children. Lawrence was drafted into the military, leaving “Bernie” to care for these children all under school age. “Bernie” did many different jobs such as sewing, washing clothes, making curtains and quilts to pay for the bills. Four years later, Lawrence returned from war. They remained in Hopkins having three more children.

“Bernie” became employed by Red Owl in 1950 and continued to work there for twenty three years before retiring and moving to Howard Lake, Minnesota.

“Bernie” continued to be involved in community activities. She was the President of the Women’s auxiliary of American Legion Post #407 for two years. She was a faithful member of Holy Trinity Catholic Church in Winsted, Minnesota and belonged to its St. Anne’s Society. She also was an active member of The C.C.W. making quilts and running bazaars. She belonged to The V.F.W. Auxiliaries in both Hopkins and Winsted.

“Bernie” enjoyed the big outdoors, gardening, flowers, plants and trees. She loved sewing many different items. She made rugs, quilts and baby clothes for charity. Along with this, she was an avid carpenter and contractor. She always had construction projects in process. She never accepted “it could not be done” because she had the knowledge to know it “could be done!”

A Mass of Christian Burial for Bernadette (Poirier) Derosier will be held on Thursday, March 8th at 11:00 A.M. at Holy Trinity Catholic Church in Winsted. Father Tony Hesse will be the Celebrant.

Interment will follow at St. Mary’s Cemetery in Waverly.

A visitation will be held on Wednesday, March 7th from 4-8 P.M. at The Chilson Funeral Home in Winsted. A Prayer Service will be held at 8:00 P.M.

Further visitation will be held on Thursday morning, March 8th from 9:30-10:30 A.M. at the funeral home.