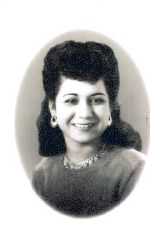 She was born on November 17, 1930 the daughter of Hilario Diaz and Rica Salazar.

Preceded in death by her husband Ruben Del Castillo, her mother Rica Salazar and her father Hilario Diaz.

A Mass of Christian Burial for Basilia Del Castillo will be held on Monday, September 21st, 2015 at 10:30 A.M. at St. Jerome Catholic Church in Maplewood. Father Kenneth Ludescher will be the Celebrant. Interment will follow at Fort Snelling National Cemetery at 12:45 P.M. Assembly Area #6.

A visitation will be held on Sunday, September 20th from 4-8 P.M. at Mueller Bies Funeral Home in Roseville.