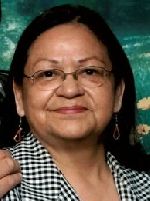 She was born in Sisseton, SD on January 5, 1952 the daughter of Percy Kirk Sr. and Marcellaine Renville.
Adoptive parents Richard and Margaret Hawkins in Sioux Falls, SD.

She graduated from Lincoln High School in Sioux Falls, SD in 1969. On August 9, 1969 she married R.K. Wakeman Jr. and they were blessed with three children. She then married Arnold Renville Jr. on December 31, 1984.

Barbara was highly educated, she obtained her Associates of Applied Science in 2006, her Bachelor’s Degree in Social Work in 2009 and her Master’s Degree in Arts in 2011. With these degrees she held numerous jobs. She enjoyed doing crafts and traveling. She loved spending time with her grandchildren and family.

Honorary casket bearers are all her nieces and nephews.