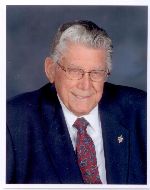 He was born on August 19, 1920 in Howard Lake the son of Frederich & Lydia Krohn Yager.

Woody served his Country in The United States Coast Guard serving four years during World War II in the South Pacific Theatre. He enlisted the day after Pearl Harbor.

On August 3, 1947 , Arwood W. Yager & Helen I. Drenckhahn were joined in holy marriage at Altura, MN. God blessed their marriage with three children.

Woody was formerly self-employed in sales.

Preceded in death by, a daughter: Cheryl, a son: Bruce, brothers: Eugene, Harlan & Donald Yager and by his sisters: Valeria Ernhardt and Lorna Anderson.

Funeral services for Arwood “Woody” Yager will be held on Saturday, May 15th at 11:00 A.M. at St. James Lutheran Church in Howard Lake. Pastors Michael Nirva and Martin Schoenfeld will officiate.

Interment with military rites will follow at The Howard Lake Cemetery.

A visitation will be held on Friday, May 13th from 4-8 P.M. at The Chilson Funeral Home in Winsted. A prayer service will be held at 7:00 p.m.