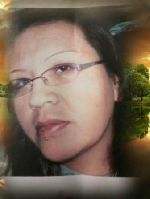 Arlene Dawn Spears, age 39, of Ponemah, Minnesota Journeyed to the Spirit World on Friday, June 29, 2012 at her residence.

She was born into the Kingfisher Clan on December 7, 1972 in Red Lake the daughter of Ralph Spears Sr. and Virginia (White) Spears.

She attended school in Ponemah.

Arlene enjoyed listening to music, spending time with her children, friends and family, going to the casino, liked to be on Facebook, spend time with her four grandchildren, beadwork and she also loved to write.

Funeral services for Arlene Spears will be held on Friday, July 6th at 10:00 A.M. at Ponemah Community Center in Ponemah, Minnesota. Spiritual Leader will be Steve Jackson. Interment Spears Family Cemetery in Ponemah.

All night wakes will be held on Wednesday, July 4th and Thursday, July 5th at the Ponemah Community Center.