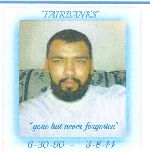 He was born on June 30, 1990 in Minneapolis the son of Gordon Fairbanks and Triva Radhakrishnan.

Anthony loved his two sons more than anything else! The love of his life was Jodi who also was his best friend.

He enjoyed playing basketball with neighborhood friends. Anthony was a graduate of Center School. He participated in Native American activities such as carrying the staff and running to the gathering of Nations. Anthony would always help the next person out if it were within his means. He also was fond of “Chilin” with his bros and hanging out. He was happiest when he spent time with his sons: Anthony Jr. and Avery.

He will be missed by all!

Funeral services will be held on Saturday, March 15th at Veteran’s Memorial Building in Cass Lake.

All night wakes will be held on Wednesday, March 12th and Thursday, March 13th at Little Earth United Tribes in Minneapolis beginning at 5:00 P.M. and continues Friday, March 14th in Cass Lake.