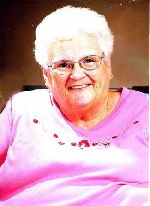 She was born on June 13, 1934 in Winsted Township, McLeod County the daughter of John A. & Clara Sterner Fiecke.

Annella and Raymond farmed for many years five miles S.W. of Winsted. She later cooked at the Alice Haney Home in Lester Prairie, worked at Green Giant, Edco and at The Parish Center for Father Wyffels.

She was a lifelong member of Holy Trinity Catholic Church in Winsted and sang in the choir. Annella also belonged to Holy Family Council # 204.

A Mass of Christian Burial for Annella Hoffmann will be held on Wednesday, April 18th at 10:30 A.M. at Holy Trinity Catholic Church in Winsted. Father Tony Hesse will be the Celebrant.

A visitation will be held on Wednesday, April 18th at the church beginning at 9:00 A.M.