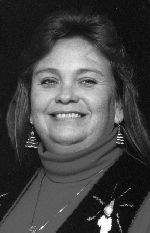 Anna Marie Greybuffalo journeyed to the Spirit World on Monday, May 24, 2010 at South Shore, South Dakota.

Anna loved the outdoors that included hunting, fishing, camping, and riding her bike. She was the person that always had a smile on her face and loved meeting new people. She enjoyed spending time with her family and friends. She has been in the gaming since 1991 and started at Grand Casino MilleLacs, MN. From there she worked at various casinos with the SWO Tribe and she became the cage manager at Dakota Sioux Casino and Hotel. She received an Accounting degree at the Minnesota School of Business and her A.A. degree in Business at the Sisseton Wahpeton College. She recently became engaged to Robert “Bob” Welder. She was to become a grandma in October to her son, Jay Greybuffalo and Chasity Amos. She was very proud of her son Scott who was finishing his education and she was planning to visit him in Utah. He was also planning to go to school in Florida for motorcycle mechanics in August which she was planning to visit there, too.

Family wakes will be held on Wednesday, May 26th and Thursday, May 27th at The Community Center in Old Agency Village, South Dakota.

An all night wake will be held on Friday, May 28th beginning at 7:00 P.M. at The Community Center.

Funeral services for Anna Marie Greybuffalo will be held on Saturday at 10:00 A.M. at The Community Center in Old Agency Village, South Dakota. Clyde Kampeska will officiate.