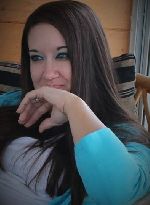 Visitation will continue after the Funeral Service at 2:00 P.M. until 9:00 P.M. at the funeral home.

Amanda (Adams) Alvarez-Rodriguez, age 32, of Glencoe passed away on Thursday, July 5, 2018 at her residence.

She was born on August 2, 1985 in Duncan, Oklahoma the daughter of Charles Allan Adams and Sandra (Lundgren) Adams-Bruins

She graduated from Lester Prairie High School in 2004.

Amanda was currently employed as a CNA at The Good Samaritan Society of Howard Lake.

Preceded in death by a brother: Charles F. Adams (Charlie), grandparents Firman Adams and Dorothy Adams and by a niece Destany Thomsen.

Funeral Services for Amanda Alvarez Rodriguez will be held on Friday, July 13th at 2:00 P.M. at The Chilson Funeral Home in Winsted.

A visitation for Amanda Alvarez Rodriguez will be held on Friday, July 13th from 11:00 A.M. to 2:00 P.M. After the Funeral Services at 2:00 P.M. the visitation will continue until 9:00 P.M. at The Chilson Funeral Home in Winsted, Minnesota.