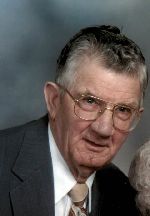 A Mass of Christian Burial for Alphonse Fiecke will be held on Tuesday, September 4th at 11:00 A.M. at Holy Trinity Catholic Church in Winsted. Father Michael Doyle will be the Celebrant.
Private interment Holy Trinity Cemetery.

A visitation will be held on Monday, September 3rd from 4-8 P.M. at The Chilson Funeral Home in Winsted. Knights of Columbus Rosary will be recited at 7:00 PM and Parish Prayers at 7:15 PM. Further visitation was held at the church on Tuesday, September 4th one hour prior to Mass.