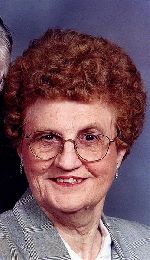 Alice was born on June 14, 1926 the daughter of Walter and Mary (Kaczmarek) Wendolek in Hale Township, McLeod County, Minnesota.

Alice married Wilbert C. Lueck on June 10, 1961 at St. Adalbert Catholic Church in Silver Lake. They farmed in Winsted Township until 2003 and remained living on the farm until Wilbert passed away on December 30, 2003. She moved to Glencoe to be near her family in 2004.

Alice was a faithful member Church of St. Pius X in Glencoe and formerly belonged to Holy Trinity Catholic Church in Winsted. Alice belong to Holy Trinity’s CCW, Catholic Aid Council # 204 and to The St. Anne’s Society of which she was the treasurer for eighteen years.

She is survived by her sister Mary Ann Ardolf of Glencoe, special nephew and niece Tim (Karla) Ardolf and LeAnn (Jerry) Clark, many other nieces, nephews and friends.

A Mass of Christian Burial for Alice Lueck will be held on Wednesday, May 2nd at 10:30 A.M. at Holy Trinity Catholic Church in Winsted. Father Anthony Stubeda was the Celebrant.

A visitation will be held Tuesday, May 1st from 4-8 P.M. at The Chilson Funeral Home in Winsted. A St. Anne’s Society Rosary will be recited at 4:00 P.M. and a Prayer Service will be held at 5:30 P.M.

Arrangements for Alice Lueck are by The Chilson Funeral Home.