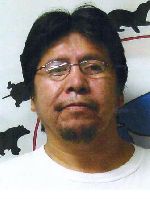 Alden Paul Jones, age 46 of Duluth, Minnesota Journeyed to the Spirit World on Monday, October 14, 2013 at his residence.

He was born on August 15, 1967 in Redlake, Minnesota the son of Pauline Jourdain-Jones and Theodore Leslie Jones.

Alden loved going to the casino, being with his only daughter and two grandchildren and hanging out with his friends in Duluth.

He will be missed by all who knew him!

Preceded in death by his parents; Theodore and Pauline Jones, a brother: Alan Jones, by four sisters: Darlene Fisherman, Carolyn Jones, Annette Jones and Lori Jones and by numerous nieces and nephews.

Funeral services for Alden Paul Jones will be held on Saturday, October 19, 2013 at 2:00 P.M. at The Redby Community Center in Redby, Minnesota. Reverend Tom Pollock will officiate. Interment will follow at the Jones Family Cemetery in Redby, Minnesota.