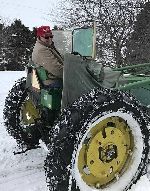 He honorably served his Country in The United States Army serving in Berlin.

On August 7, 1965, Alden J. Enger and Georgine B. Betker were joined in holy marriage at Main Street Lutheran Church in Hutchinson. God blessed their marriage with three daughters.

Al was formerly employed for forty years at Honeywell and hog and crop farmed in Winsted Township, McLeod County.

He served eighteen years on the Lester Prairie School Board and on the Winsted Township Board.
He was a faithful member of St. Paul’s Lutheran Church in Lester Prairie. Al also belonged to the V.F.W.

Preceded in death by a daughter, Krista Enger, his parents, Alvin and Gladys Enger, a brother, Floyd Enger and by his parents-in-law, George & Esther Betker.